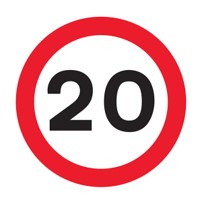 TfL have introduced reduced speed limits across 8.9km of London roads within the Congestion Charging Zone from Monday 2 March 2020. This is a significant move to reduce road danger across the capital. The new 20mph speed limits will be enforced across all TfL roads within the Congestion Charging Zone and are supported by new signage and road markings.

Raised pedestrian crossings are being installed in prominent locations where a high number of people walk, including near Embankment and Tower Hill Underground stations and outside the Tate Britain. TfL have recalibrated all the speed cameras in central London and will work closely with the Metropolitan Police to ensure that drivers are complying with the new safer speed limits.

This should not have too much impact on coach drivers in London and with the large number of road junctions and traffic signals, which automatically slow down traffic, in practice it should not make much difference to overall journey times.

Speed is a factor in around 37% of collisions in London where a person dies or is seriously injured, which is why reducing the speed limit is key to the Mayor’s Vision Zero commitment to eliminate death and serious injury from London’s transport network by 2041.

Following feedback, the Maintenance Investigation Visit Reports (MIVR), which DVSA carries out to ensure operators have the right systems and facilities in place to maintain their vehicles, are changing. The MIVR assessment guides are being combined and updated to reflect this. The guides are used by DVSA staff to help them complete the report during … END_OF_DOCUMENT_TOKEN_TO_BE_REPLACED

From Friday 11 March until June 2022, weekend closures of the A40 Westway will change to affect westbound traffic. Since November 2021 essential maintenance has been ongoing with weekend and overnight closures to the eastbound carriageway. The next phase of work sees a switch to the other side of the carriageway and those travelling eastbound … END_OF_DOCUMENT_TOKEN_TO_BE_REPLACED

Coach parking to be reinstated on Park Lane. TfL introduced a new road scheme on Park Lane, including the removal of coach parking, as an emergency response to the coronavirus. In response to feedback TfL are planning the following changes to their scheme, with construction due to start in the coming months. New bus lane … END_OF_DOCUMENT_TOKEN_TO_BE_REPLACED

Permanent protective barriers are being installed on Westminster Bridge to make it safer for pedestrians and cyclists. Work will continue until late January 2022, with some overnight finishing works continuing into early February. During the works there will only be one lane in each direction for all traffic, causing delays, especially at busy times.

Changes to the Highway Code

Consultation on Ultra Low Emission Zone (ULEZ) starts TfL have launched the consultation for the expansion of the ULEZ from its current boundary inside the North and South Circular roads to cover the whole of greater London, with a planned introduction date of Tuesday 29 August 2023 (the day after the late summer bank holiday). … END_OF_DOCUMENT_TOKEN_TO_BE_REPLACED